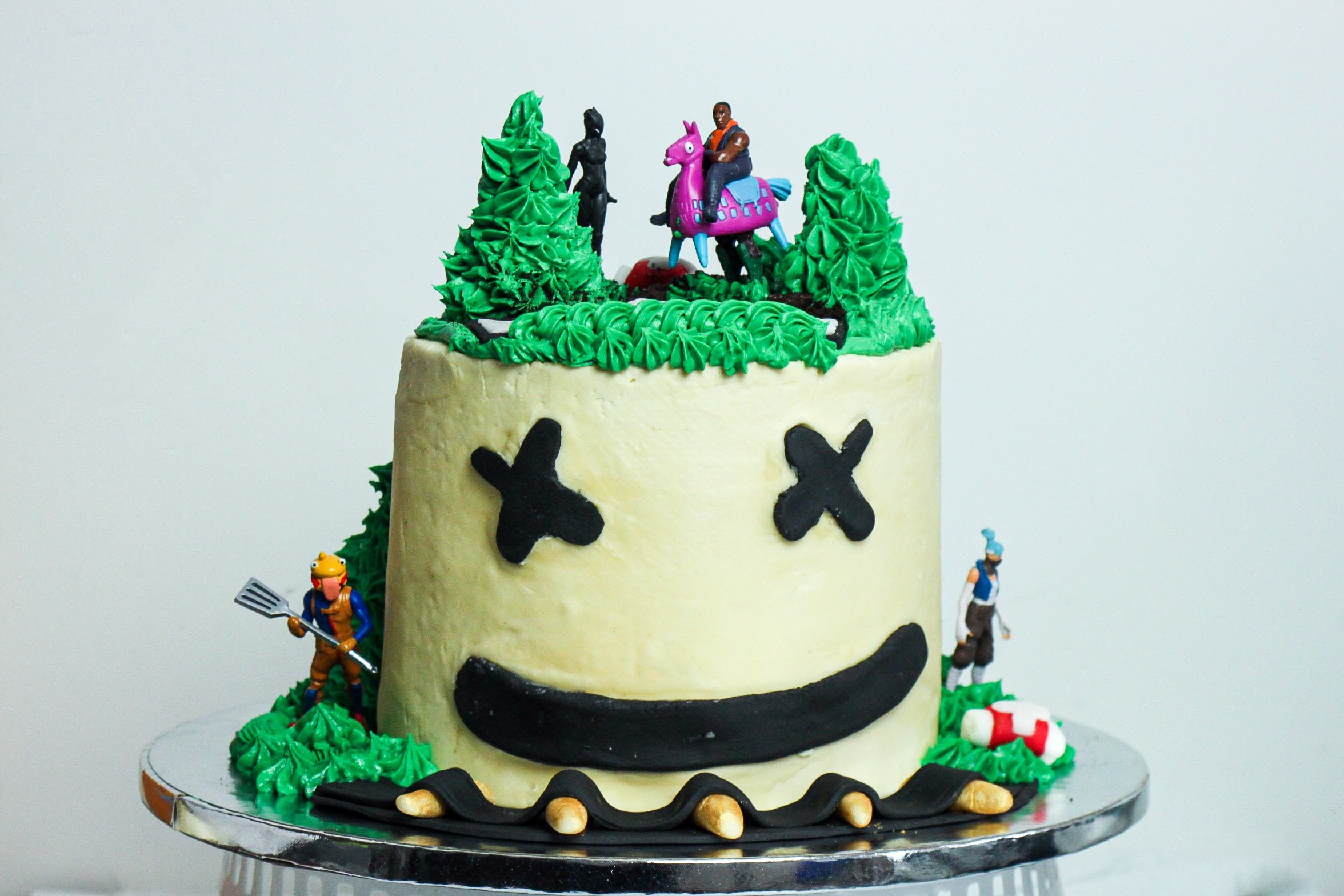 How I Made My First Themed Birthday Cake

Apparently I am officially OLD. When I was asked to do a Fortnite cake my whole response was, “Fort what?” Fortnite is actually a really popular cake theme. Who knew so many kids are into the game!

Thankfully I was given a few figurines and a picture for reference so with the help of Pinterest I was able to put together a pretty cool cake.

The cake is a Vanilla layer cake with vanilla buttercream. 8 inch Silicone molds were used with around 2 1/2 Cups of batter for each mold and baked for around 25 minutes.

One of the best investments I’ve made this year was purchasing Wilton cake straps which help to keep the cakes from forming domes on the tops.

Once the cakes are cooled on goes the buttercream. I use Beyond Frosting’s Vanilla Buttercream recipe because its the best and I use it all the time. The buttercream is nice and thick and sets really well.

Smoothing is still a new process for me so i’m still in need of some smoothing tools. In the meantime, a piece of parchment paper and cake spatula helped to smooth the buttercream.

Another new challenge was fondant. I purchased black and white Fondant, using the black for the dj marshmallow’s eyes and mouth as well as the bullet holster. The bullets and first aid roll ups were made from white fondant using red food gel and gold dusting for details.

The trees were a little trick I found by Cuisineoz using ice cream cones. Cut the cones to the desired height and pipe all around. The trees on the side of the cake are cones cut in half.

The dirt is ground up Oreo shells. How genius is that! Only thing is they are messy so a little Oreo dirt got on the trees.

It was an ambitious attempt but it came out pretty good. Having Graphic Design skills and an art background also helps.

Did a Google search for a Fortnite logo then printed it out. I then put another paper with the number 8 on top and created a whole new logo.

The new image was then laid over pre-rolled black fondant to create the black base.

The tedious part was the individual white letters. If I owned a hobby knife it would have been easier however I managed to work with what was here.

The letters and number 8 were placed onto the black fondant using extra buttercream as glue.

The total decorating time was around 3-4 hours. There was some stopping to set in the fridge and an interruption by the baby but I started the designing at 11pm (while the baby is asleep) and finished at 3am.

Overall its a lot of work but very fun. Working with new challenges and learning new skills will definitely be useful for future cakes. The next step is to learn to cover a whole cake in fondant.

Drop a comment blow and let me know what you think. If you decide to make any of my recipes leave me a comment or tag me on Instagram @myeagereats or hashtag #myeatereats .

I’d Love to hear from you!

Sign up and be first to receive the latest recipes, updates and offers.

Processing…
Success! You're on the list.
Whoops! There was an error and we couldn't process your subscription. Please reload the page and try again.

See My Other Posts

How to make the Most Incredible Vegan Shepherd’s Pie